A year ago, on 21 January 2019, CNIM - in partnership with Socarenam, Mauric and CNN MCO - won the contract to replace the French Navy's landing barges with 14 new vessels effectively confirming CNIM’s status as European leader in the area of amphibious operations.

This project is structured in several phases, enabling the first two production EDA-S to be completed in record time: only 11 months for two vessels! 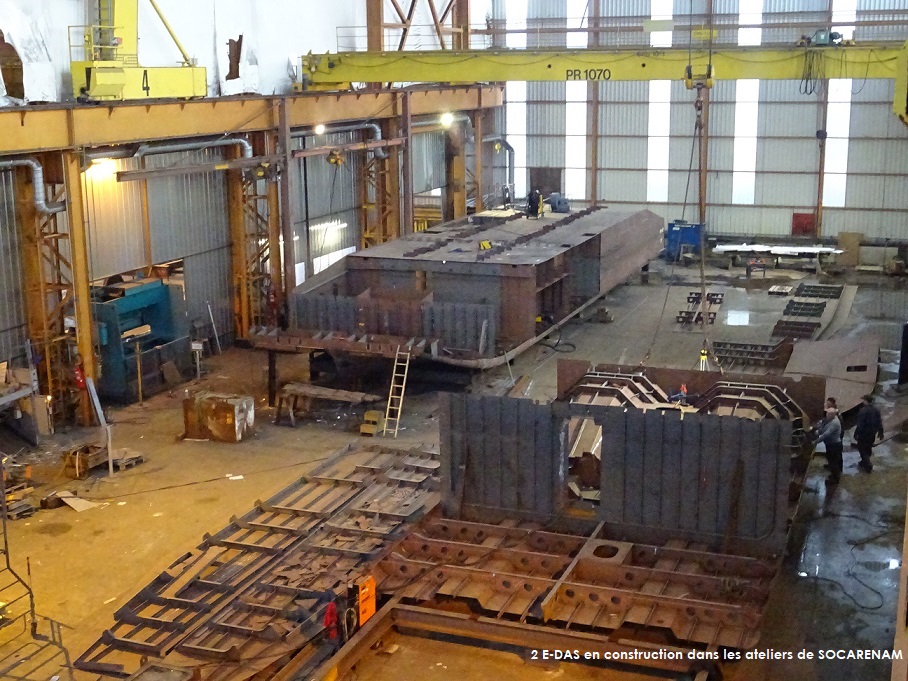 3 phases for the construction of the first 2 EDA-S

The first two EDA-S are now under construction in Saint Malo, at the shipyard operated by Socarenam, which has been a CNIM partner since 2008.

The process of validating the design of the vessel’s structure by the French defense procurement agency (from the keel to the main deck), ramps and propulsion system, which formed Phase 1 of the project, is now complete. As a result, construction work was able to begin, on schedule, in October 2019.

Phase 2 is now underway with the construction of the two first ED-AS in Saint Malo in SOCARENAM’s workshops.

Phase 3, during which the boats will be fully equipped and outfitted, is scheduled to begin in February 2020.

The project is subject to rigorous management with our client DGA, which integrates all the state actors involved (CEPN, CPPE, ITA, etc.) in the decision-making chain to ensure that the program progresses smoothly, comply with the requirements and that the expected results are achieved. At least monthly status reports are carried out with the DGA.

A number of high value-added innovations will further enhance the performance of these new crafts, including an anti-heeling system[1] that keeps the EDA-S completely stable regardless of its load, an engine cooling system resilient to heavily fouled water, and a propulsion system that delivers exceptional manoeuvrability for a single-hulled amphibious landing craft.

“The EDA-S is packed with innovations never seen before on this type of landing barge. We have leveraged our expertise from previous projects to surpass the requirements of the DGA and the vessels’ crews, who have already expressed their satisfaction. “notes Vincent BOULIER, EDA-S Project Manager with CNIM’s Naval Systems team.

The first two vessels are expected to be afloat at CNIM’s dock (la Seyne-sur-Mer, Var) by September 2020, ready for an approximately three-month programme of sea trials and crew training.

These trials will verify the performance of the craft: speed (13 to 18 knots when loaded), draft (1.3 m when loaded), 360° manoeuvrability and ability to carry the French army’s latest generation of tanks (including the Scorpion range).

Crew training, carried out by the CNIM team with support from CNN MCO (maintenance services), will cover the use, operation and upkeep of these vessels.

When the first two EDA-S have been qualified, CNIM and the Group’s partners will initiate construction, following the same procedure, of the next four crafts, destined for the FLOPHIB amphibious flotilla based in Toulon. These will in turn be followed by a further eight EDA-S, bound primarily for naval bases in Overseas France. 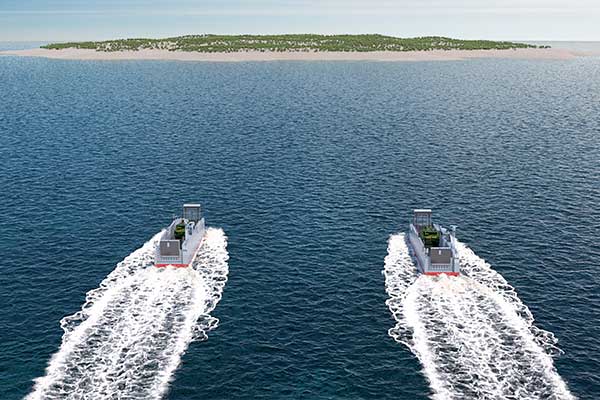 [1] Heeling (or listing) describes a ship that tilts along its longitudinal axis to either the port or starboard side. If the barge is unevenly loaded, this system can correct up to a 3° angle of heel by transferring fuel from one side to the other.