SUNCNIM and Banque des Territoires, shareholders in the ELLO project company, inaugurated the Llo thermodynamic solar power plant with energy storage, in the presence of Martine Rolland, representative of Hermeline Malherbe, President of the Departmental Council of the Eastern Pyrenees, Eliane Jarycki, representative of Carole Delga, Former Minister and President of the Occitania Region, Jean Castex and Helene Josende, General Councillors of the Catalan Pyrenees, Georges Armengol, President of the Pyrenees Cerdagne Community of Communes, Philippe Chopin, Prefect of the Eastern Pyrenees and Jean-Marie Mas, Mayor of Llo. The plant, which began construction on September 12, 2016, has been in production since May 14, 2019. 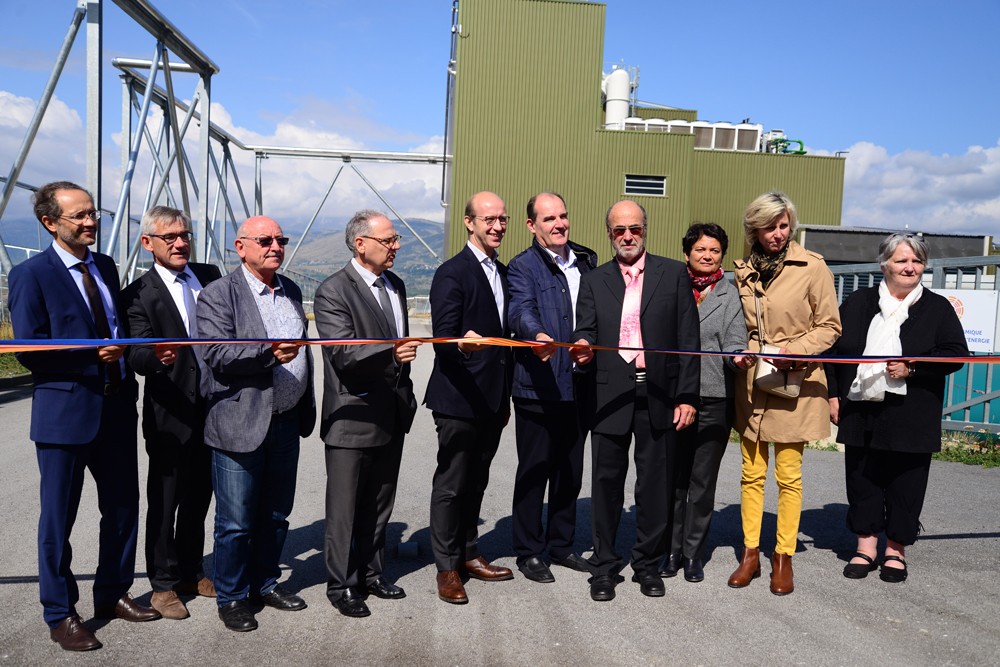 Llo, Friday September 20, 2019 - Located in Llo in Cerdagne (Eastern Pyrenees), it is the first thermodynamic Fresnel solar energy concentrator with energy storage in the world. Built and operated by SUNCNIM, a subsidiary of the CNIM Group, it will contribute to the energy independence of Cerdan region and reduce the use of fossil fuels. With a power output of 9 MWe and thermal energy storage, i.e. the electricity consumption of more than 6,000 homes, the Llo power plant produces electricity both during the day and part of the night.

Environmentally-friendly technology
With an eco-friendly design and 100% recyclable, the Llo power plant is the achievement of work made in France. It uses "Fresnel Mirror" technology to collect solar energy using 153,000 m² of mirrors, and then stores thermal energy using technology developed by SUNCNIM. Driven by a remote computerized control system, the mirrors track and concentrate the sun's rays onto a fixed receiver tube placed 10 meters above the ground. Water circulates inside the heated receiver tube and is then turned into steam. Such steam can either be used in industrial processes or to produce electricity, heat, pure water, or even cooling. It can also be stored in pressure vessels for use at any time, including at night. "This storage capacity is a considerable trump for the renewable energy operation, but it is solar irradiation dependent, explains Stanislas Ancel, Chairman of SUNCNIM. The Fresnel system uses technology which can produce thermic energy. As it only uses water as heat transfer fluid, it is also the most environmentally-friendly".
The project has also a positive impact on the local economy. Plant construction has required more than 100 workers during peak periods, and its operation has generated eight permanent jobs held by residents of the Cerdan plateau.
The solar plant is erected on land located near Llo village, close to other pioneering solar concentrating equipment: the Mont-Louis solar furnace, built by Felix TROMBE in 1949, the solar furnace built by CNRS-PROMES in Odeillo-Via in 1969 and the Thémis plant in Targasonne, for which CNIM designed and built the solar boiler in the 1980s.
Banque des Territoires is a 49% shareholder (7.8 million Euros in equity) of the ELLO project company, which brings the investment to nearly 65 million Euros and thus confirms its willingness to work for the ecological and energetic transition to promote more sustainable regions.

Nicolas Dmitrieff, Chairman of the Management Board of CNIM : "The Llo solar power plant demonstrates our ability to design, build and operate facilities that answer to today's major energy challenges. It is the outcome of CNIM Group's approach to renewable energies, integrating R&D, prototyping and industrial operation.”

The Llo solar plant in figures:

The institutions financing the operation:

About SUNCNIM
A subsidiary of the CNIM Group, SUNCNIM is the first joint venture involving the SPI fund, "Société de Projets Industriels", financed by the Programme d’investissements d’avenir and operated by Bpifrance. SUNCNIM is a turnkey constructor of thermodynamic solar power plants within the global marketplace.
www.suncnim.com

About CNIM
Founded in 1856, CNIM is a French equipment manufacturer and industrial contractor operating on a worldwide scale. The Group provides its products and services to major public and private sector organizations, local authorities and national governments in Environment, Energy, Defence, and High Technology markets. Technological innovation is at the core of equipment and services designed and manufactured by the Group. They contribute to the production of cleaner and more competitive energy, to reducing the environmental impact of industrial activities, to the safety of sensitive installations and infrastructure, and to the protection of people and States. CNIM is listed on the Euronext exchange in Paris. It relies on a stable family-based majority shareholding structure committed to its development. The Group employs 2,613 people and had revenues of €689.8 million in 2018, 62.1% of which was from exports.
www.cnim.com @CNIM_Group
Press Contacts: CNIM / Agence Gootenberg – laurence.colin@gootenberg.fr – +33 1 43 59 00 46

About Banque des Territoires
Founded in 2018, Banque des Territoires is one of the five businesses of Caisse des Dépôts. It gathers the internal expertise for the regions under one roof. As a single point of entry for customers, it offers tailored loan and investment advisory and funding solutions to meet the needs of local governments, social housing organizations, local public enterprises and the legal professions. It targets all territories, from rural areas to cities, with the aim of combating social inequality and regional divides. Banque des Territoires is present at the 16 regional offices and 35 local branches of Caisse des Dépôts to provide better services for its customers.
For more attractive, inclusive, sustainable and connected regions.
www.banquedesterritoires.fr @BanqueDesTerr

Video of the project
Top
Close